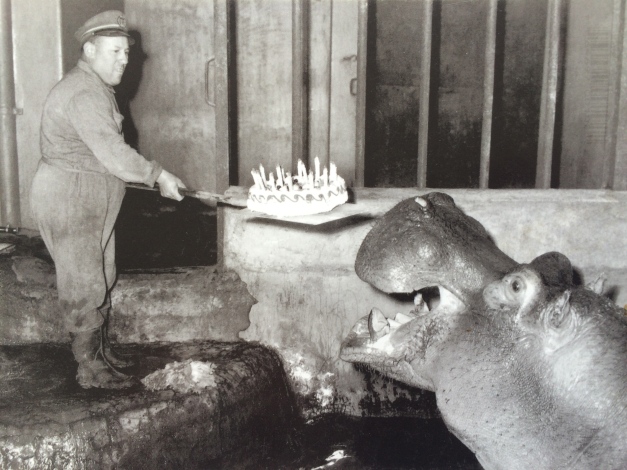 Feeding cake to a hippopotamus.

It’s rare to find an image that so perfectly represents both the delights and the dangers of the consultant’s life, particularly for those of us offering our own artful practice to organisations hungry for new experiences.

It takes a while for organisations to realise that they need what you’ve got: improv, storytelling, visual arts, dance, clowning, poetry, music, ritual, drama, etc. But when it becomes faddish they all want a bit of it, at which point everyone else and their uncle jumps on the bandwagon and claims to be able to provide it.

Actually, what organisations need is not so much the particular artful practice on offer as the creativity and humanity they can bring. At best, they break down conventional barriers and open up communicative spaces where the purposive-rational logic of the system world can be challenged by the social-communitarian values of the life world.

If that happens, then relationships can deepen, profound insights arise, and behaviours change. In fact, I believe that we must engage artfully with the world if we are to extend the scope of our concerns beyond immediate self-interest toward what my friend Richard Olivier calls “planetary purpose.”

But artful practices can be consumed merely as amuse-bouches at the corporate dining table, entertaining flourishes to alleviate the ennui of weary managers. And at worst, they can be used cynically to further reprehensible or morally dubious ends, or to “make-happy” rather than address the dysfunctional organisational dynamics of late capitalism.

For good or ill (and perhaps for both) the arts have become the latest “must have” ingredients of executive leadership events and business school programmes. For example, the notion of Narrative Leadership that I first developed more than a decade ago now has widespread currency.

Instead of knocking on doors trying to persuade reluctant HR managers that they need our skills as storytellers, I and my colleagues find ourselves much in demand. We have a responsibility not to let this bonanza blind us to the ends to which our clients use our work, and to make our artful practice accessible without corrupting it.

As an artful practitioner, the tricky thing these days isn’t to get the hippo to eat the cake, it’s to make sure the hippo doesn’t eat you too.